Rhinebeck, I *Heart* You

I Love Rhinebeck. It’s that simple. Really, it’s the perfect fiber show. Fall, Upstate New York, beautiful fairgrounds, all the lovely knitter folk that turn out, the best vendors a fiber fiend could ask for, what’s not to love? 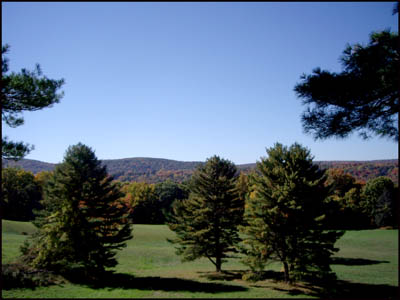 I couldn’t have asked for a more perfect weekend. There is a new man in my life, and he came with me this weekend, and I swear, never in my life had I had such a zero stress travel experience. We had a great time, start to finish. Even with the long, long, ride home (seriously, 8 solid driving hours, and totally worth it!) after a full morning at Rhinebeck. Cheryl asked how I got him to come with me after we’d only been dating a few weeks, and I said after I told him all about the show, he wanted to go. He’s a keeper, I think.

Not only that, but I got to see some great people, not for as long as I would have liked, of course, but that is the nature of these things. At this point, I go to fiber shows more for the people than the stuff, I have enough stuff, you all know what I mean!

LINKFEST-
There was my favorite firey haired knitter, Jenn, along with lovely NYC knitters, Michelle, Jackie, and Heather. Not to mention Carole, and Kathy, and Laurie. The awesome Kate was there too, I watched Cheryl teach her to hand card, and got to coo over her adorable Tadpole. On Saturday, we ran into Stephanie and Juno, as they just got there and were making a beeline to the bathroom. I saw them just long enough for Stephanie and I to point at each others sweaters and go “ah!” (she was wearing her Kauni Cardigan, it’s to die for). I also saw Jess for a minute on Sunday, and introduced myself, she was definitely the lady of the hour this weekend!
There were more… um,
Ruth! I met Ruth, (again, I think, I’m pretty sure we met last year) but this year she was sporting a great little accessory, the wee WoolyBabe! So. Cute. Her wee little cheeks almost killed me! On Saturday night, there was a little gathering in one of the hotel rooms, and Kim had her brand spanking new Norm Hall wheel set up, (after 7 years on the waiting list) and allowed a bunch of us to test drive it. Oh, it was a thing of beauty. I love my little Joy wheel, but there’s just no comparing!

After the show on Saturday, we left at about 3, and spent some time walking around the little town of Rhinebeck, and walked around one of the State Parks located off Route 9. We walked on a trail along, but way above the Hudson. It was absolutely picturesque. I love upstate New York in the fall, and there’s no doubt I’ll be going back year after year.

What’s that? You want to see what I bought? Okay! 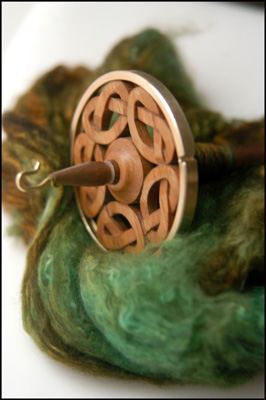 This was at the top of my shopping list this year. A Golding Ring Spindle. I’ve wanted one of these since last year, but hadn’t been able to make it to a show since last Rhinebeck. I’m thrilled to add this to my fiber gear collection. I use my drop spindles only once in a while, but this makes it so much fun. At 1.9 oz, it’s a little heavier a spindle than I’m used to, but since I like to spin thin yarns, this is just fine by me.

Then, since I got a new spindle, I had to have some fibers to spin on it! A stop at the Cloverleaf Farms booth fixed that. 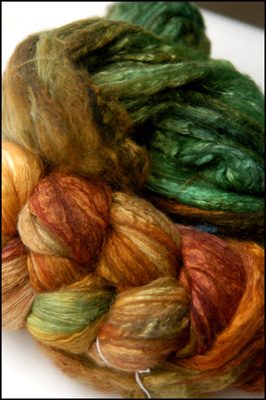 This is 2oz each color of 50/50 Merino/Cultivated Silk. It is so yummy to spin. I think it wants to be a single, and then knit into something lacy. I like it so much that I just ordered a couple of pounds to dye up myself. As soon as I do, there will be some in my shop.

No fiber show trip would be complete with out a stop at Stefania’s booth, as is becoming my tradition, here we have some Corriedale/Silk dyed in madder, cochineal, and osage. There’s about 7oz here. I’ve totally been loving the orange lately. 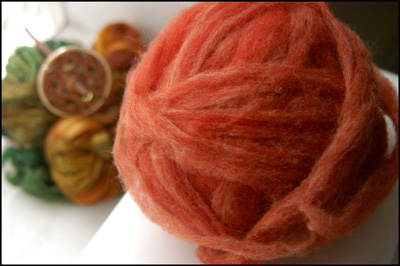 I also bought 4oz of Cormo fiber to spin, but it’s undyed and just looks like a pile of creamy fluff. Use your imagination. Oh, and I bought this book. It’s definitely a great one to have. So not so much damage done this trip, and that’s fine. I got what I wanted, saw a million people, and had a great time. Can’t wait til next year!

Also! I will be having a mini shop update today, probably around 1:00 pm, EST. I’ll be putting up a bunch of Vesper Sock Yarn! I’m very close to the 1000th order now, and I’ve decided what the winner will get, but I’ll save that for the next post, it’s really good!

This entry was posted in Get Your Yarn!!, RhineBeck, Stash Enhancement. Bookmark the permalink.

20 Responses to Rhinebeck, I *Heart* You